Citizen Experience Management – see your country through the eyes of the citizens: CEM Institute has developed an automated CEM setup in East Africa for the Danish Ministry of Foreign Affairs. Every quarter (since January 2011), the setup provides analysis of economic trends, markets and developments in society, based on a dialogue with 1,800 nationally representative, randomly selected Kenyans.

The concept is implemented in a similar manner in Denmark and was originally devised by the former IFKA, Institute of Business Cycle Analysis. Here, the Catglobe software offers a good example of the efficiency with which we have automated the data collection, quota management, data processing, statistics and reporting workflows. Handling of the associated workflows previously required 11 research consultants and 3 economists. With the Catglobe software, however, the work now requires only 1 person. The concept is currently known as CEM Economy. In order for it to be used in East Africa certain adjustments were required due to cultural and demographic differences, but otherwise the entire automated part was simply copied and transferred.

CEM Economy gives you an overview of both short and long term market and society forecasts.

In CEM Economy, business people, politicians, organizations, and journalists have access to data on approx. 300 aspects of consumption, market and society, which are constantly updated. Using “favourites”, each user can compose his or her own starting page to contain precisely those figures, which are of importance to the user. The user can also make segmentations like in the below example, where “Have purchased PC” has been cross-segmented with “Did see advertisement TV Channels yesterday“. In addition, the user gets economic forecasts going 3-24 months into the future. On the shorter term (3-12 months ahead), forecasts will be based on the consumers’ purchasing plans within each industrial segment. On the long term, Catglobe calculates a weighted average 12 to 24 months into the future, based on forecasts from Statistics Denmark, the Danish Economic Council, OECD and the banks.

This is how CEM Economy currently works in Denmark and East Africa, and work is underway to extend the system to even more countries. 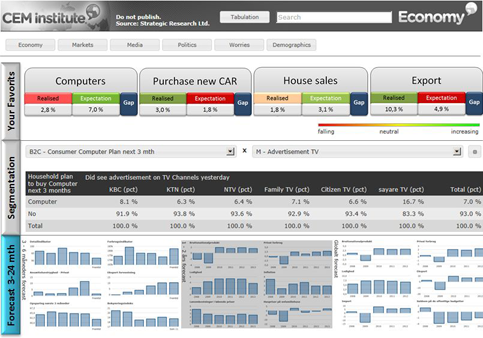